Somehow this strikes me as a fitting dramatization of the recent “revelation” that NSA intel gathering is being used for purposes other than protecting us from crazed middle-easterners who hate freedom.

“What kind of lesson does it teach our children if they’re chipped like cattle and their every movement tracked?” asks Jay Stanley, senior policy analyst with the ACLU’s Washington, D.C. office. “It doesn’t create the kind of independent, autonomous people that we want in our democratic society.”

It may not create the kind of independent, autonomous people that you want in “our” democratic society, but I imagine there are some people—like, the ones in power—who think this is exactly the kind of lesson “our” children should be learning.  Hence, the public school system.

The prosecutor argued that J.D.B. had never been in custody, only in school, and that no reasonable person would have believed he or she was in custody.  [emphasis added]

Yes, because no “reasonable person” would ever associate being held captive for seven hours a day in a state-run institution with being “in custody.”  Only a crazy person would think such a thing! 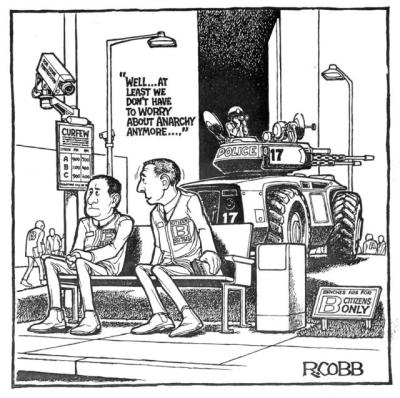